This is part of a series of posts I’m writing to introduce characters from the Castle Keepers epic fantasy series. This week, it’s Zipporah Sanderson.

In short: Human; male; tall, broad shoulders, black bushy eyebrows, brown hair that is greying at the sides, currently living in Aruam Castle, captain of the guard; a fair fighter in his younger years.

Sanderson, as he is referred to by his men, was born and raised in Maskil. When he was a young man, he was saved by a guard from Aruam Castle. This inspired him to enlist. He learned the sword quickly, and those in charge saw his potential.

In the books, there is no mention of family in Sanderson’s life. That doesn’t mean he has none. It means only that it has yet to be revealed. Obviously, he had parents, and I’m guessing he had siblings, too. I’m sure they’ll show up in future novels.

As for a love interest, there appears to be none. However, I will leave you this exchange between Sanderson and Bronwyn from Shadows in the Stone:

“I figured as much,” Sanderson said. “When a man looks at a woman as you did the night Alaura walked in to meet with the lords, he loses all control of his senses. It’s as if his blood catches fire and every time she comes near, she adds tinder to keep the flames rising. I tried to douse the flame but knew it was like trying to extinguish a conflagration with drunken spit.”

Bronwyn swallowed hard. It sounded as if the captain of the guard once had a fire for a woman, one that burnt out of control.

…and this scene involving Bronwyn, Sanderson and Beathas of Ailsa in Scattered Stones:

“Sorry to interrupt your battle games, boys,”—Beathas flung her chin in the air and considered Bronwyn through narrow eyes—“but the moment of resolution has arrived.”

“On what matter?” Sanderson folded his arms across his chest and stared down at the short hauflin.

“This doesn’t concern you.” She stepped closer to Bronwyn. “Are you to claim what you most desire or let it slip through your hands like that man?” She flicked her fingers at Sanderson.

He swallowed hard. What had Sanderson most desired and lost?

Where I Found His Name

I don’t rightly remember. They came to me in pieces. Sanderson sounded like a good army name and, well, Zipporah was something different that wouldn’t be used except in unique times.

Sanderson didn’t appear in the original Shadows in the Stone story written in my teens. However, during the rewrite, I needed someone at the helm, so he was conceived. When the story opens, he has served for almost 30 years. 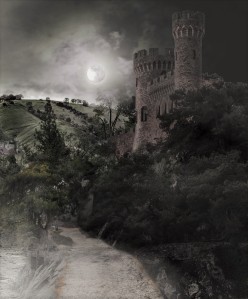 Sanderson is often the thorn in Bronwyn’s side. He tries to mould the young dwarf into the perfect guard, but Bronwyn doesn’t always heed his advice. However, Bronwyn trusts Sanderson more than any other superior.

Sanderson has a soft spot for Isla, who calls him Sandy and draws pictures of him. There is often a subtle exchange of wisdom between the two.

He appears in Shadows in the Stone and Scattered Stones but not Revelation Stones. He is the biggest fan and caretaker of the castle, and his priority is protecting the castle. Read into that what you will.

I have an inkling that Sanderson will not live to see book 10, but who knows. My inklings have been wrong in the past.