My Castle Keepers series has grown immensely since I published the first book in the series on May 6, 2012. Shadows in the Stone introduced readers to several main characters and a host of supporting characters. Although most of them are ingrained in my brain, it might be difficult for readers to keep up with who’s who.

There are two reasons for this:

To refresh the minds of readers and to give new readers a place to refer to, I’ve decided to show case one character a week. In addition to explaining their role in the series, I’ll add additional information, such as where I found their name.

In short: Dwarf, male, born and living in Maskil, swordsman, at the start of Shadows in the Stone, he was a corporal with the Aruam Castle guard.

Bronwyn is the youngest child of Maisie and Gaven Darrow. He has three older sisters and two older brothers. Since he was a young teen, he loved the sword. He practised every day in his back yard. When he was old enough, he enlisted with Aruam Castle and was soon part of the castle guard.

We first meet him in Blade of Truth where we learn about his final days in study hall, the girl he had a crush on and the horrible prank he endured.

In Shadows in the Stone, we meet him while he’s engaged in trailing thieves who had broken into Aruam Castle. Later, he becomes involved in Alaura of Niamh’s and Isla of Maura’s lives. His goal is to move up through the ranks at the castle. He’s a trustworthy fellow, who loves a laugh, is too bashful for his own good and dislikes the use of magic to solve problems. And he can be a little pig headed.

Vignette #14 is a moment in Bronwyn’s day between Shadows in the Stone and Scattered Stones.

Bronwyn has been a member of the cast for decades. I met him when I was a wee hauflin thief running with a band of misfits. We called ourselves the Warriors because we figured we were tough.

Of course, we got in to trouble and in one adventure, we accidentally killed a lord of Aruam Castle. That didn’t sit well with the other lords and the guards. They were ready to lynch us. However, a young guard understood our dilemma and knew we were tricked into attacking the caravan with the lord because he was trailing the real perpetrators.

This young guard, a dwarf, was named Argon. We were released from the dungeon under his supervision, which meant we had to go on quests with him and for him. For many years, we had a grand time galivanting around Ath-o’Lea, gathering wisdom and magical weapons. Then, one day, the unthinkable happened: we saved the day for Aruam Castle, and all our crimes were forgiven.

Although we were free to go, we kept in touch with Argon and continued to cross paths with him while seeking our own adventures. Occasionally, he’s asked for our help, and we were glad to assist.

When I was 16 years old, I began writing stories about our adventures on The Trail, and of course, Argon became an intricate part of them. A few years later, high school behind me and entering the work force, I had to put my adventures on hold. Argon and the Land of Ath-o’Lea were tucked away in a drawer, waiting for my return.

At the age of 30, home and taking care of a newborn, I opened that drawer and reread the stories I had written. They were crude, written by a high school student taught all the wrong lessons in English class. I mean, those dialogue tags – “Gag me!” I hissed with contempt.

Over the next 13 years, I sifted through our long-ago adventures, rewrote, revised and learned new writing skills (the ones published writers use).

The final draft was called Shadows in the Stone, and although it resembled what truly happened, it was very different. 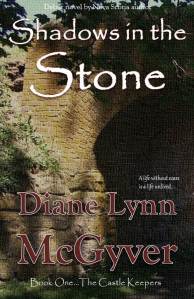 Two months before the novel was published, a beta reader suggested I change Argon’s name. What? Isn’t that like naming a son and when he’s 30, you decide you prefer another name? I mean, Argon was a noble gas, aka noble subject of Aruam Castle. How could I change a name I had grown to love because of our experiences together?

“It’s too much like Aragorn of Lord of the Rings,” she said.

“What is this Lord of the Rings?”

“Well, it’s not that famous, so it doesn’t matter.”

“Where were you dragged from? The deep blue sea? Everyone has read Lord of the Rings? Didn’t you?”

Hesitating. “No. Why should I?”

“Of course, I did.” Several titles run through my head. “I’ve read a lot of Terry Brooks. The Sword of Shannara made me fall in love with the genre.”

“That’s a take off of Lord of the Rings.”

“Lord of the Rings was released in the 50s.”

“You can’t name your dwarf Argon. Change it!”

“You better, or people are going to think you’re ripping off Tolkien.”

“How can I rip him off if I’ve never heard of him?”

“They don’t care about that. Just do it.”

Grumbling. “There is no way I will feel the attachment to another name as I do Argon.”

“Get over yourself and change the name.”

I fought the urge to find a new name for weeks. I researched this Tolkien guy, tried to read Lord off the Rings but only got to page 100 (or less). It didn’t do anything for me.

I tossed and turned at night, trying to find an attractive name that would hook me. I mean, Argon is not Gary, Letch or Douglas. He’s not Andrew, Nitro or Billy Bob. During the day, I glanced at lists of male names. None of them were good enough. I tried to make up an interesting name; that failed miserably.

I made a short list of acceptable names, none that grabbed me or struck a chord on the heart strings. I mean, how do you change a name you’ve grown to love over 30 years?

With time ticking down and the publishing date approaching, I had to make up my mind. It was agonizing. I knew Argon would always be Argon even by a different name, and that was what eventually made me accept that I could make the change. Argon would be his real name, but he’d go undercover in the novels and use a pseudonym.

Narrowing my choices down to six names, I plugged each of them into a paragraph of the story and read it. The best one was Bronwyn (with a Y, not an I, which was female). I could live with it, but I promised myself it wouldn’t grow on me.

I made the switch in the manuscript and began reading. Every time I encountered the name, my mouth said Bronwyn, but my brain said Argon.

When I began writing book two Scattered Stones, I wrote the first few pages using Argon. Then I stopped myself. I needed this uncover name to become real. I had to make the switch – and I did.

Years later, after saying the name hundreds of times, it has grown on me. Most of the time, I think Bronwyn. I won’t ever forget Argon, but he’s in full undercover mode now.