Dwarf, lord of Aruam Castle, first appeared in chapter 05 of Shadows in the Stone

The sun shined in the window, and Lord Laird Mulryan leant on the sill looking over the grounds of Aruam Castle and Maskil. The morning has been pleasant; he had enjoyed the day’s first ration surrounded by those he loved most. The small gestures, smiles and friendly chatter left him feeling as if he were the luckiest man in Ath-o’Lea.

He sighed, already missing their company and longing to return, but two days were all he could muster to be away from his post. Significant matters needed tending; he had to put the order in for new recruits to bolster the lower ranks. The combined numbers of foot soldiers and castle guards was to be maintained at one thousand fighting men and from his calculations, they were severely deficient.

Movement on the outer wall walkway caught his attention: Lord Val was strolling, gazing into the forest. He wore only his regular clothing, leaving his robe behind as he ventured on his morning walk. Something peculiar in the manner the lord walked made Laird think he was ill. The usual lively steps had been replaced with a slow moping movement. Perhaps his night had been late and he had dealt with castle business.

Laird hoped he hadn’t missed anything important. The activity in the guardhouse appeared normal as he passed through on his way to his chamber. Surely if something was amiss he would have been informed immediately.

He returned his attention to Lord Val who sluggishly made his way towards the towers near the front gate. Laird respected the man, but disagreed with his logic on many days. Perhaps their differences were rooted in race. It was the obvious answer, but was it the truth? Other elves did not ignite an urgent feeling in his gut; why did this man? 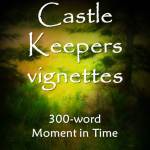 Castle Keepers Vignette: Almost five years has passed since Isla was kidnapped and Bronwyn left Maskil in search of her. In many ways, not much has happened; the inhabitants of the Land of Ath-o’Lea have continued their daily routine. But if you look deeper into the individual lives you’ll see much has changed in little ways.

The Castle Keeper vignettes provide a glimpse into the time between Shadows in the Stone and Scattered Stones. You’ll have already met many of the characters, but some you will meet in Scattered Stones.

These vignettes won’t be complete stories, only 300 words of a moment. I consider them exercises in writing and editing. I hope to write two a week and post them on Mondays and Thursdays as we lead up to the release of Scattered Stones, the second fantasy novel of the Castle Keepers series, on May 6, 2016.

The collection of vignettes will be organised on the Castle Keepers Vignettes page. On the first of each month, I will post the schedule of the characters I will write about that month.